“The adjuster only spent thirty minutes at my house.”

“He didn't take many pictures at all.”

These are just a few of the reports we have heard from policyholders when they tell us what happened when the insurance company's adjuster came out to inspect their home.  Often the adjuster who is sent out is not experienced enough to identify all the damage.  He or she may not spend the necessary amount of time at the property or explore all the cavities and crawl spaces that would allow the insurance company to prepare an estimate that truly covers all costs to repair.  This makes what the insurance company's adjuster did (or did not do) during the inspection of your home a critical element of your insurance claim.  The good news?  According to a recent Florida opinion:

You Can (and Should) Record the Insurance Company's Inspection of Your Home.

And, you should.  If you create evidence supporting your version of the events that occurred during the inspection, the fact determination of what the adjuster did or did not do will not became a he-said, she-said debate later on.  Rather, the video you made will serve as undisputable evidence of what occurred during the inspection.  In Silversmith v. State Farm, decided July 7, 2021, the Florida Fourth DCA determined you, as the homeowner, have the right to record any inspection conducted of your home.  2021 WL 2910240 (Fla. 4th DCA 2021). 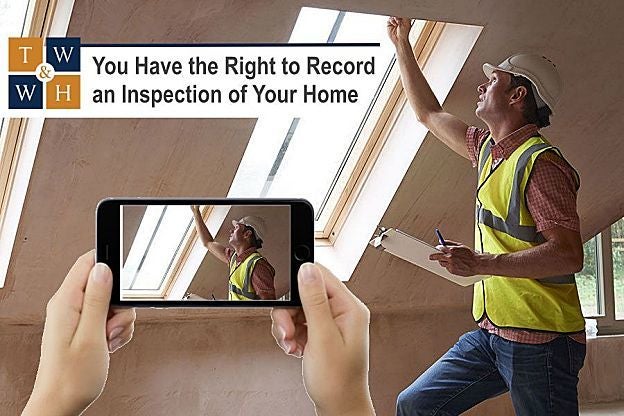 In Silversmith, State Farm, not surprisingly, objected to the homeowner's request to record its inspection of her home, arguing it had not provided consent to the recording and it had an expectation of privacy during the inspection. Thankfully, the court saw through this smoke screen and agreed with the homeowner that State Farm did not have a reasonable expectation of privacy in a policyholder's home and that nothing in the policy prevented the policyholder from recording the inspection.

With this opinion holding strongly in favor of policyholders' rights, we would strongly recommend you make a video recording any time an insurance company sends an adjuster out to inspect your home.  If the adjuster objects, that is fine.  Let him or her object but do not be deterred as you have a legal right to make the recording.  Do not be bullied.  If the adjuster says he or she will not conduct the inspection if you record it, that is fine, too.  Let him or her leave.  The insurance company is going to have to explain what it is they fear a video recording of what should be an objective inspection would reveal.  We would relish the opportunity to tell your story and let a jury of your peers know your insurance company refused to conduct what is supposed to be a good faith inspection simply because you wanted to record it.

Protect Yourself by Gathering Evidence of Your Insurance Company's "Investigation"

Any time an insurance company sends an adjuster to your home to inspect, you should record it.  If you do not have a phone or camera capable of recording, take notes about what the adjuster did, the areas he or she inspected, and what he or she told you during the inspection.  This will turn out to be valuable evidence if you later get into a dispute with your insurance company as to the scope of damages.  It is in your best interest to protect yourself and gather and preserve evidence that shows what actually took place during the inspection of your home.  As the court recently reiterated in Silversmith, you have rights.  Never forget that.  Insurance claims can be tricky, and insurance companies know all the tricks.  If you are ever unsure of what actions you can or should take with respect to an insurance claim, please do not hesitate to contact us.  We are happy to answer any of your questions without any fee, cost, or obligation.