Why Would an Insurance Company Not Want You to Record Their Inspection?

Imagine you are a homeowner who has suffered damage from a storm.  Your insurance company wants to send an adjuster out to conduct an appraisal to investigate and determine the cost of the damage to your home.  These days, with virtually all of us carrying a smartphone, would you be inclined to videotape the adjuster's examination of your home?  Do you think it may come into dispute later what the adjuster did during the investigation, where all he went on the property and what he looked at or did not look at?  Unfortunately, we see this coming into dispute often.  The homeowner claims the adjuster did not set foot on the roof; then the adjuster says he was up there for half an hour inspecting damage.  It turns into a he-said, she-said.  Wouldn't a video of the investigation be helpful for everyone to prove what actually happened?  State Farm does not think so. 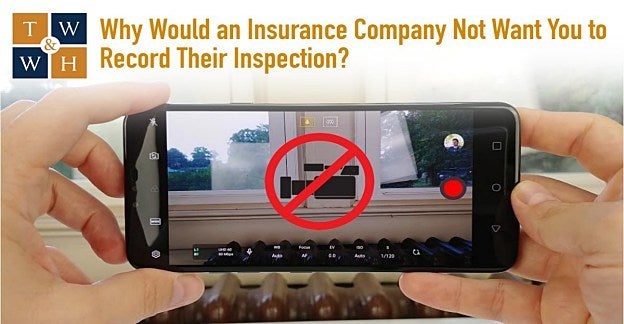 Why Would an Insurance Company Object to a Recording of Its Adjuster's Inspection?

In State Farm Florida Insurance Company v. Chirino, when the homeowner sought to record the insurance company's adjuster's inspection of his home, the insurance company called the appraisal off.  They stopped the entire case (further delaying payment on the claim) to file an appeal on the issue of whether the inspection could be recorded.  Why do you think that is?  With the number of hurricane claims we have handled, we know it is likely because insurance companies do not want indisputable proof of what occurred during their adjuster's inspection.  This is because they want to be able to say “Our adjuster determined your damages are only worth X dollars” with no way for you to dispute it.   The insurance company does not want evidence to be created that could help protect you and your rights.  But, that is not an argument they can make with a straight-face to the court.

Why State Farm Claimed the Recording Should Be Prohibited

On appeal to the Third District Court of Appeal of Florida, State Farm made two arguments to the court, claiming the recording:

Thankfully, the court saw through both of these and quickly dismissed State Farm's petition.

The court reasoned the constitutionally-granted right to privacy only prohibits invasion of privacy by conduct of the government, not a fellow private citizen (here, the homeowner). So, the adjuster's right to privacy from the government would be in no way violated by the homeowner recording his inspection.  In addition, the court found no proof in the record to show the homeowner had the intent to in any way harass or intimidate the adjuster by recording his inspection. This policyholder simply wanted to document what State Farm did to investigate his claim.  And, that simple request was one State Farm flat-out refused, fought ferociously, and even used as an excuse to further delay payment on this claim.  This is a perfect example of an insurance company—which has more money and resources to drag out and litigate claims than you—bullying its own policyholder in hopes he would cave and accept less than the full value of his claim.

We are grateful for the fight the policyholder put up in this instance, the court's sound reasoning in this case, and its issuance of an order that will help us protect policyholders' rights going forward in documenting the insurance company's actions or, as is often the case, inactions while investigating claims.  If an insurance company is refusing to allow you to do something you feel would help support your insurance claim or proof of damages, you have rights.  Contact us any time for a free no-cost, no-obligation consultation to learn your rights.