To state a claim for bad faith, the policyholder must allege “specific facts and circumstances” that prove the insurer acted in bad faith.  To State Farm's dismay, an accusation that it “lowballed” the claim is enough to state a claim for bad faith according to a recent opinion out of the Florida Fifth District Court of Appeal.  State Farm also tried to shirk the claim of bad faith by alleging the period of time it had to cure an allegation of bad faith under the law—60 days—was tolled by its invocation of appraisal.  The Fifth DCA disposed of this argument as well.  Here's what happened. 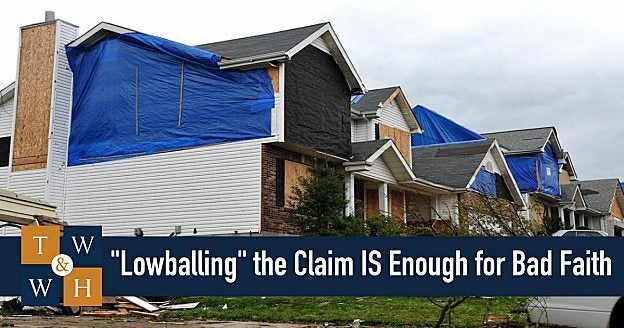 In Apex Roofing & Restoration, LLC v. State Farm Fla. Ins. Co., 343 So. 3d 1223 (Fla. 5th DCA 2022) the policyholder's home was damaged by a windstorm.  The policyholder hired a roof contractor, Apex, to repair the damage to his roof and assigned his benefits (i.e., his right to recover the cost for the roof work) to Apex.  State Farm estimated the damage at around $18,000.  Apex performed the necessary roof replacement and sent State Farm an invoice for the work which was around $45,000.  State Farm refused to pay this actual incurred cost although it was required to do so under the policy of insurance.  Instead, State Farm disputed and rejected the cost of repairs.  Apex decided to pursue a bad faith claim against State Farm for its refusal to pay the actual incurred cost for the roof replacement.

The Allegations of Bad Faith in the Civil Remedy Notice

Although Apex clearly stated in the CRN State Farm intentionally “lowballed” and underpaid the claim because it “glossed over the extent and nature of damages, called for the damage to be addressed by improper means of repairs, suggesting numerous "half-cures," and/or included pricing for labor and materials that were inconsistent with the marketplace” State Farm claimed this wasn't specific enough.  In other words, according to State Farm, an allegation that it undervalued the claim and did not pay enough is not sufficient to state a claim for bad faith.  Thankfully, the Fifth DCA disagreed and found the allegations in Apex's CRN were more than sufficient to state, with the requisite specificity, the fact and circumstances that showed State Farm had adjusted the claim in bad faith.

State Farm also attempted to avoid the claim for bad faith by alleging, without any legal support, that the period of time it had to cure an allegation of bad faith under the law—60 days—was tolled by its invocation of appraisal.  The Fifth DCA disposed of this argument as well in explaining there was no language in the CRN statute, Fla. Stat. § 624.155, that supported State Farm's argument.  Rather, the language of the statute showed it was the legislature's intent invocation of appraisal after a CRN is filed would not toll the 60-day cure period.

You can read the entire Apex v. State Farm opinion here as well as the CRN Apex filed against State Farm here.

Has Your Insurance Company Lowballed Your Claim?

It is not uncommon for an insurance company to swoop in after a windstorm or hurricane, quickly inspect and estimate your damages, and then issue you a small payment in hopes you will accept that as full payment on your claim.  And many policyholders do because they don't know how to dispute the insurance company's finding.  They don't know how to fight back.  Well, we do.  We've been helping policyholders with their property damage claims as far back as Hurricane Opal in 1995, and we know how to help you protect your claim and preserve the evidence that is needed to show the insurance company they lowballed your claim and they owe you more money.  If you believe your insurance company has undervalued and underpaid your claim, do not hesitate to contact one of our attorneys for a no-cost, no-obligation consultation.  We're here to help.