The 3M Combat Arms Earplug Products Liability Litigation is growing, as more injured victims continue to come forward and more attorneys have become involved.  Often, in complicated lawsuits like this, which involve a dangerous or defective product that affected large numbers of people, federal courts will sometimes consolidate the cases into an MDL—Multidistrict Litigation—to streamline and more effectively manage the case.  In an MDL, multiple civil cases that share common issues are transferred to a single court for discovery (fact-gathering) and pre-trial proceedings in an effort to conserve judicial resources.  Due to the large number of potential victims in the 3M matter and commonality of the allegations in each case, the 3M litigation was recently consolidated into an MDL and transferred to Judge M. Casey Rogers in the United States District Court for the North District of Florida.  See http://www.flnd.uscourts.gov/mdl2885. 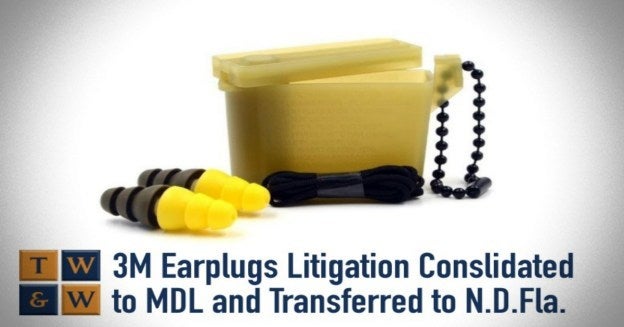 The Common Questions of Fact

The plaintiffs in the 3M MDL allege the defendants' dual-ended Combat Arms earplugs were defective and caused the plaintiffs to develop hearing loss and/or tinnitus.  The Judicial Panel on Multidistrict Litigation determined these cases all involve common questions of fact “concerning the design, testing, sale, and marketing” of the Combat Arms earplugs. This decision was also made in hopes of preventing inconsistent pre-trial rulings and avoiding duplicative discovery.

If You Used 3M Earplugs After 2003 and Suffer From Hearing Loss or Tinnitus, Contact Us

TWW attorneys, Phillip Warren and Keith Weidner, relied on earplugs to protect their hearing when they served in the United States Marine Corps.  When TWW learned the government brought a claim against 3M for knowingly selling defective earplugs, we knew the victims of this injustice were the people who relied on those earplugs.  The lawsuit alleges the earplugs were defectively designed in that they were too short for proper insertion into the service members' ears, allowing them to imperceptibly loosen and dangerously expose thousands of users to hearing damage.  The government's lawsuit alleged 3M knew these earplugs were defective as far back as 2000, yet the company continued to sell millions to the U.S. military.  We believe 3M should be held accountable to the victims and have to compensate those who suffered from tinnitus or hearing loss as a result of their defective earplugs.  If you used dual-sided Combat 3M Earplugs ™ after 2003 and suffer from hearing loss or tinnitus, contact us.  You may be entitled to compensation.