You Need an Attorney Because Insurance Companies Hide the Ball 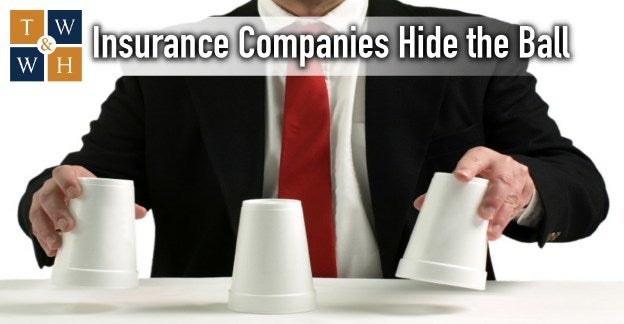 Why Did the Insurance Company Refuse to Produce Its Photos of the Damaged Home?

The insurance company claimed the photos were a privileged work product.  In legal terms, this means the insurance company created them in anticipation of litigation (a lawsuit) to assist them in defending the lawsuit.  Think about that.  To make this argument, the insurance company was essentially saying the moment they went out to inspect the policyholder's damaged home, they anticipated a lawsuit would have to be filed.  Meaning, the moment they began investigating the claim, they anticipated a dispute with the policyholder on how much would be owed on the claim. Does that sound like an inspection that is undertaken in your best interest?  To find the most coverage available for you?  Taking photos in such a way that will allow them to say you're seeking too much money on your claim?  That doesn't sound fair because it's not.  But, insurance companies often treat their policyholders unfairly.

What Are They Really Hiding?

The “ball” insurance companies are hiding is more coverage—more money—they owe you.  Payment on an insurance claim is meant to put you back in the position you were in before the accident or property damage occurred. Not halfway recovered.  100% recovered.  But, insurance companies often spend their “investigation” of your claim trying to find ways to say they are only required to pay a portion of or your medical bills but not all, some of your home repairs, but not all. When in reality, they have a contractual duty to pay 100%.  They hide their obligation, however, banking on the fact that you—without an experienced insurance attorney helping you—won't know how to find it.  You probably don't even know there is additional coverage to hide.

Insurance companies are able to hide coverage because they know the game much better than you.  They play the game every day.  Don't let them win!  If you feel an insurance company is treating you unfairly, perhaps hiding something from you, contact us immediately for a no-cost, no-obligation insurance claim review.