Winning in Arbitration Less Likely Than a Lightning Strike

Did you know you are more likely to be struck by lightning than win in a forced arbitration? A recent study from the American Association for Justice shows why big corporations like to force everyday Americans to sign away their rights to a jury trial in lieu of arbitration: because it means wronged consumers or employees will be far less likely to bring and win a claim to redress an injustice. This is why our civil justice system is so important and why we always treat every claim we handle at TWW as if it is going to trial. Having your fate decided in a public trial by a jury of your peers, rather than a private process by a selected arbitrator, will always be the most fair way to hold big corporations that put dollars before rights accountable.

The Truth About Forced Arbitration Study by the AAJ 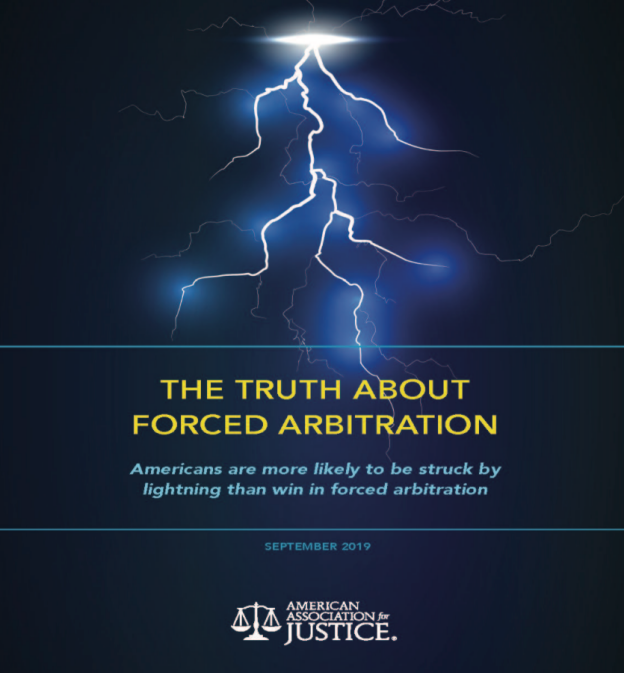 The AAJ's study, aptly titled The Truth About Forced Arbitrations, examines forced arbitration claims data over a five-year period from two of the largest arbitration providers in the U.S., AAA (American Arbitration Association) and JAMS. Meaning, the data used was compiled by the arbitration providers themselves. And, it revealed some shocking statistics when it comes to the number of claims subject to arbitration that are even pursued and, even more rarely, won:

In addition, AAJ researchers discovered AAA deletes cases by filing date rather than closure date every quarter even though this is a database of closed claims. This means that the longer it takes for an arbitration case to resolve, the quicker it is purged from that database and any case that takes more than five years will never even appear in their records. Any research claiming arbitration is faster than litigation has been skewed by this data manipulation.

The report highlights the two largest sectors guilty of using forced arbitration clauses – employment contracts and financial services. Of the 60 million employees subject to forced arbitration, only .02% tried to pursue a claim, and of those, only 282 were awarded monetary damages over the five-year period studied. That equates to an average of 56 workers per year, less than one-ten-thousandth of one percent of all American workers subject to forced arbitration. In financial services arbitration (credit cards/banks), consumers brought 6,012 claims over five years totaling $3.7 billion in damages, but won monetary awards in just 131 (2.2%) cases, totaling $7.4 million, which is .2% of the claimed damages.

Unfortunately, The Truth About Forced Arbitration shows the most marginalized individuals are the ones most adversely affected – women, minorities, and lower income individuals, as forced arbitration is more common in low-wage workplaces and in industries that are disproportionately composed of women and African American workers.

Do Not Sign Your Right to a Jury Trial Away Lightly

At TWW, we are always disheartened when a potential client comes to us who has been wronged by a big corporation only to learn that corporation also forced the consumer to sign away his or her right to have their case heard by a jury of their peers. If you are making a purchase or entering into a credit agreement or some other transaction, be sure to read the fine print carefully to see if there is an arbitration clause that will force you to sign away your right to a jury trial. Big corporations (many credit card companies and large, national employers) force such provisions on consumers out of fear for our civil justice system because it is the only place where everyday people like you can hold greedy companies accountable. Being able to bring your case before your peers is a fundamental right that should not have to be waved lightly.

You can read the AAJ's full The Truth About Forced Arbitration study here.