Three Things Jurors in a Car Accident Trial Are Not Told

Like you, every other driver in Florida is required to carry insurance, which means you most likely have liability coverage in place to pay for damages you may cause in case you are at-fault in a car accident.  Each of us can likely recall a moment where we were distracted, in a hurry, or simply made a bad decision and almost caused, or did cause, an accident.  This is the precise reason we have liability insurance in place—to protect us in this situation by paying for the damages we accidentally caused.  But, what you don't know is that the insurance company for the at-fault driver will often deny the at-fault driver is at fault.  It happens all the time.  Insurance companies often try to pay nothing at all or as little as possible to the other injured driver. 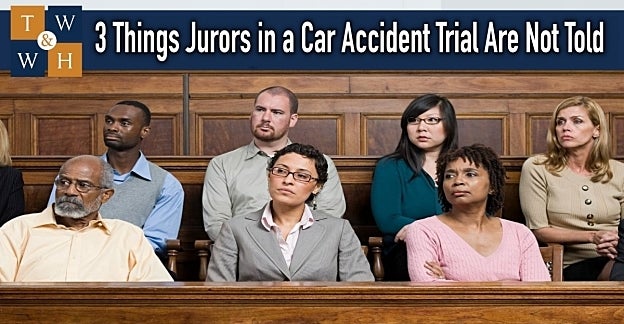 Fact #3: The Insurance Company Often Hires Experts to Give Them Favorable Opinions

As soon as a driver notifies his or her insurance company of an accident, the company's adjusters often begin looking immediately for evidence they can use to say the accident was not their policyholder's fault.  This is true even if their policyholder was at-fault.  This is because the insurance company has every incentive to find witnesses, take photographs, and gather evidence that would support an argument that their policyholder did not cause the accident so they can pay less to the other innocent, injured driver.  This includes hiring experts.

In many car accident cases we have tried, the at-fault driver's insurance company hires an accident reconstruction expert and pays them a good sum of money to create a version of the accident they can use to say the accident was not their policyholder's fault.  They do this so they can deny coverage and pay less on the claim.  These accident reconstruction experts are often paid upwards of $300-$500/hour for every minute of work they do on the file.

Fact #2: The At-Fault Driver Will Usually Not Have to Pay the Judgment

As a juror, sitting in the box you will see two tables facing the judge.  One is the plaintiff's table where the injured driver who is asking you to render him a verdict will be sitting with his attorney.  The other is the defense table, where the at-fault driver will be sitting with her attorney.  What you will not be told, because attorneys cannot under the law disclose this to you at trial, is that the entirety of the defense that will be put on by the at-fault driver is paid for by her insurance company.  From the attorney sitting at the defense table who is usually billing by the hour, to every expert that will appear at trial and tell you opinions favorable to the insurance company, they are all paid for by the at-fault driver's insurance company.

And, when you render a verdict in favor of the injured driver and against the at-fault driver, she will not usually be the one who has to pay it.  More often than not, her insurance company will.  Just as yours would if you caused an accident that injured another driver.  From the view in the jury box, however, you won't know this, and rendering a verdict against the driver sitting at the defense table may weigh on you mentally, particularly if she appears sympathetic.  The insurance company knows this and often uses it their advantage.  It is their most clever trick.

Fact 1: The Insurance Company Often Uses the At-Fault Driver as Their “Cover” at Trial