“We investigated your insurance claim and found some of the damage to your home is not covered because it was not caused by the storm.”  As insurance lawyers who have been helping policyholders with their hurricane claims for decades, we've seen insurance companies take this stance a lot.  And, if it is true—for example, some of the damage to your home was pre-existing when the storm struck—the insurance company may be able to rightfully exclude it.  The problem is, when we ask an insurance company for the evidence they gathered that proves what caused the damage, they often say “Oh, well, that stuff is secret.  We don't have to give you that.”  We know what you're thinking.  That's not fair.  If my insurance company is relying on it to deny my claim, they shouldn't be allowed to hide it from me.  Thankfully, Florida's First District Court of Appeal (“DCA”) recently agreed with you when it denied Omega Insurance Company's attempt to hide critical evidence from our clients. 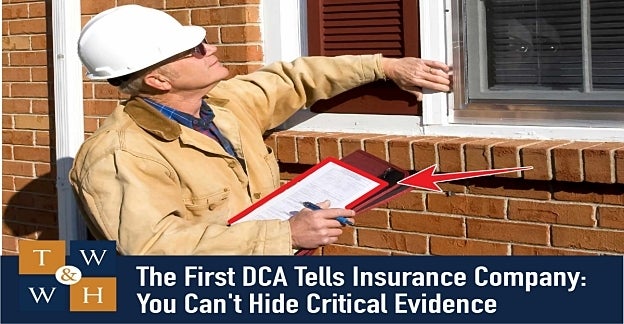 Eddie and Rachel Workman came to our firm as many other clients do, with damage to their home that was caused by wind during a hurricane (in their case, Hurricane Sally) and an insurance company that had denied part of their damages claiming they were caused by an excluded cause (flood) as opposed to a covered cause (wind).  Just as most insurance claims develop, the Workmans' insurance company, Omega Insurance Company, had sent a field adjuster out to the Workmans' home to inspect the damage and provide an opinion as to the cause of the damage.  During his inspection, Omega's field adjuster took photos and prepared comments accompanying the photos that spoke to the cause of the damages, as well as a report to Omega about the damage and an estimate of the cost to repair the damage.

Based on this evidence created by its field adjuster, Omega decided to deny payment for part of the damages claiming they were caused by flood.  This dispute eventually forced the Workmans to have to file suit against Omega to recover the full amount they were owed on the claim.  During discovery (the evidence-gathering phase of the lawsuit) Omega chose to withhold the comments its field adjuster prepared relating to the cause of the damages claiming they were not relevant.  We disagreed and argued to the trial court that Omega's reliance on the photo comments to deny part of the claim made the comments not only relevant, but critical.  Thankfully, the trial court agreed and ordered Omega to produce its field adjuster's photo comments.  In response, Omega continued in its obstinate refusal and filed an appeal of the trial court's order for production.

In its appeal to the First DCA Omega essentially claimed the photo comments upon which it relied to partially deny the claim were not relevant in the breach of contract action because the claim had not yet developed to one for bad faith.  We have explained the difference between these two claims and the process for pursuing a claim for bad faith here.  We fought Omega's appeal and argued to the First DCA that the Workmans' claim for breach was based on Omega's failure to pay for damages it claimed were caused by flood, making any evidence upon which Omega relied in denying damages it claimed were caused by flood relevant to the breach of contract action and therefore discoverable.  Meaning, the Workmans were entitled to see that evidence so they could ask Omega's field adjuster questions about his comments and findings and dispute the evidence at trial.

We were thrilled to see the Order that recently came out from the First DCA outright denying Omega's appeal.  The First DCA wholly rejected Omega's argument that it can withhold evidence upon which it relies in rendering a coverage decision based on a claim that the evidence is irrelevant and not discoverable until an action for bad faith is filed.  This was a huge win for the Workmans and policyholders across the board as it will make it far more difficult for Florida insurance companies to withhold critical evidence from its policyholders in an attempt to hide the ball and hinder policyholders' ability to dispute their coverage decisions and take them fairly to trial to account for their wrongful denial of claims.  We are incredibly grateful to the Workmans for their patience and perseverance in refusing to give up their fight against Omega, even though it required them to endure a lengthy and frustrating appeal.