A federal judge in Brooklyn has filed suit against his insurance company, Allstate, claiming Allstate made contradicting statements and false promises while adjusting his home damage claim then wrongfully tried to evict him during the Coronavirus pandemic. 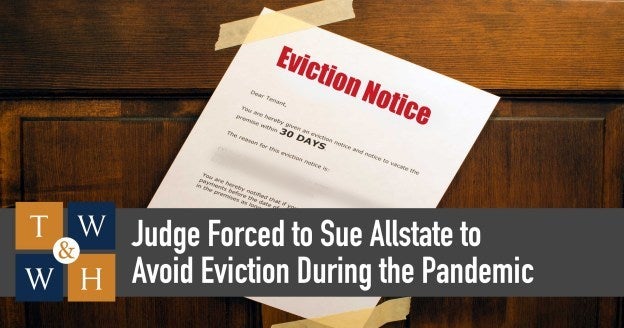 After a fire ravaged their home, which was insured by Allstate, U.S. District Court Judge Gary Brown and his wife were forced to move into an apartment while their home was being repaired.  The judge claimed Allstate conducted a slow and lazy investigation of their claim, letting it linger for six months, while adjusters assured the judge the home could be repaired before then turning around and saying it could not.  Does this sound like something an insurance company has done to you?  Told you one thing, then something entirely different, all while the claim was dragging on and on with no repairs being made?  Unfortunately, we see this all too often—insurance companies coming up with excuses to avoid paying claims in full—which is not fair to the policyholder. But, Allstate took it even further in this case, attempting to evict the judge and his wife during the Coronavirus pandemic.

In his lawsuit, the judge claims Allstate initially agreed to enlarge the one-year cap on additional living expenses (expenses incurred as a result of the loss, including rent to reside in a different location) because the repairs were taking so long. Then, Allstate changed its mind and issued a notice to vacate on March 19, 2020, attempting to have the judge and his wife evicted in the middle of the Coronavirus pandemic in direct violation of the 90-day eviction moratorium announced by New York Governor Andrew Cuomo. This comes from Allstate while the house is still unrepaired and uninhabitable as a result of Allstate's alleged poor handling of the claim and while repairs have stopped completely to slow the spread of COVID-19.

“[B]y attempting to coerce the Browns to vacate their rental home in the middle of the COVID-19 pandemic,” the lawsuit alleges, “Allstate and CRS have cavalierly placed the Browns' health and safety in jeopardy, ignored Allstate's own commitment to enlarge the time for the Browns to remain at the rental home, and ignored the existing moratorium on evictions in New York state.”

Sadly, we see insurance companies take tactics like this often, putting their policyholders at risk to spare their bottom line.  For example, we have seen several insurance companies attempt to non-renew policies for homes that were damaged in Hurricane Michael, claiming the house is not in an insurable condition because of roof or window damage, when that is the very damage the insurance company is wrongfully refusing to repair.  This is not only a breach of their contract with the policyholder, it is also a violation of Florida law.

While it can be shocking sometimes to see the lengths an insurance company will go to in order to avoid paying claims in full, the good news is you can always get answers and help with your claim for no cost unless you recover.  It often takes a lawsuit to get the insurance company to do the right thing, and—as Judge Gary Brown has demonstrated—you should not be afraid or feel any guilt in filing a lawsuit when your insurance company has treated you unfairly.  Judge Brown's suit against Allstate alleges breach of contract, promissory estoppel, breach of the implied covenant of good faith and fair dealing, and deceptive practices.  Judge Gary Brown was previously a federal magistrate judge. He was nominated to the federal judgeship by President Barack Obama and President Donald Trump. He was confirmed in December 2019.