You may have heard the phrase “accord and satisfaction” before.  Do you know what it means?  In layman's terms it means an agreement to discharge a person's obligation to you by accepting alternative performance instead.  For instance, assume you purchase tickets for a Saturday night show, but the theatre accidentally overbooked and offers you upgraded tickets for a Thursday night show instead.  As long as you agree this alternative performance would fulfill the theatre's obligation to you, this would result in an accord and satisfaction.  However, the key focus there would be your agreement to accept the alternative performance in fulfillment of the original obligation.  In a recent opinion from the Florida Fifth District Court of Appeal (DCA), an insurance company tried to get away with doing something different than they originally promised.  But, they did it without the policyholder's agreement.  Thankfully, the Fifth DCA refused this attempt and reversed the judgment that had previously been entered in favor of the insurance company.

Payment for the Initial Damage Discovered

In Lemon v. People's Trust Insurance Co., 2022 WL 1814128 (Fla. 5th DCA June 3, 2022), the policyholders, Richard and Leanne Lemons', home had sustained damage during Hurricane Matthew.  The Lemons' insurance company, People's Trust, found damage to the roof, fence, and master bedroom ceiling and issued a check for those repairs.  The letter People's Trust sent with the check advised the Lemons that they could submit a supplemental claim for damage if they found additional damage later that was not covered by the initial check.  After depositing the check, the Lemons discovered more moisture damage in their home's ceilings, garage, and home office.  Accordingly—as People's Trust informed the Lemons they could do—they filed a supplemental claim for the additional damage discovered. 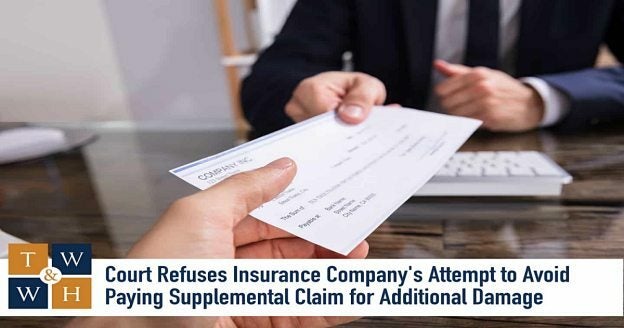 In direct contradiction to the promise People's Trust made the Lemons, People's Trust refused to pay the supplemental claim, stating the Lemons' cashing of the check for the initial roof, fence, and master bedroom ceiling repairs operated as an “accord and satisfaction” of People's Trust's obligation to the Lemons to pay for any further damage caused by Hurricane Matthew.  As the Lemons successfully argued on appeal, this was not what People's Trust had initially promised in the policy of insurance, and it was not what the Lemons had agreed to by cashing the first check.  In essence, People's Trust was trying to claim Thursday night tickets would suffice when the Lemons had paid for a Saturday night show and had not agreed to accept anything different than what they originally bargained, and paid, for.  The Fifth DCA agreed and found People's Trust attempt to argue “accord and satisfaction” based on these facts was not fair and did not fulfill its contractual and statutory obligations to compensate the Lemons for all covered damage caused by the hurricane, whether submitted in the form of an original claim or a supplemental claim.

Don't Let Your Insurance Company Play Games With Your Claim

We were grateful to see justice served in this case in that the Lemons were able to have the judgment that was originally entered unfairly in favor of People's Trust overturned.  We share opinions like this with you so you can be aware of the games insurance companies often try to play to avoid their obligation to pay claims timely and in full.  Don't let an insurance company play games with your claim.  If you do not understand a position your insurance company has taken or you have questions about the way you are being treated by your insurance company, never hesitate to contact us for a free, no-cost, no-obligation consultation.  Our experienced attorneys are here to help and answer your questions.