Court Orders Insurance Company to Pay, Even When Repairs Had Not Been Made

Is your insurance company refusing to pay for repairs?  You'll want to read this case to see how Citizens handled this claim and what the court thought about it.  In Citizens Property Insurance Corp. v. Tio, after the policyholder's property was damaged by a collapsed drain line, rather than investigate the claim in the policyholder's best interest looking to find all available coverage, Citizens denied coverage saying the damage was caused by water leakage over time, which was excluded under the policy.  2020 WL 1291855 (Fla. 3d DCA 2020).  Unfortunately, we see this all too often, i.e., an insurance company trying to avoid paying a claim, in part or in full, by claiming the damage was already there, that it is the result of normal wear and tear, or, as here, that it was caused by something that is excluded under the policy.  Never let an insurance company's initial determination as to the cause of damage to your property be the end of your claim.  Seek a second opinion or contact an experienced insurance attorney for help.  The Tio case is the perfect reminder that sometimes it takes an attorney to force the insurance company to finally do the right thing. 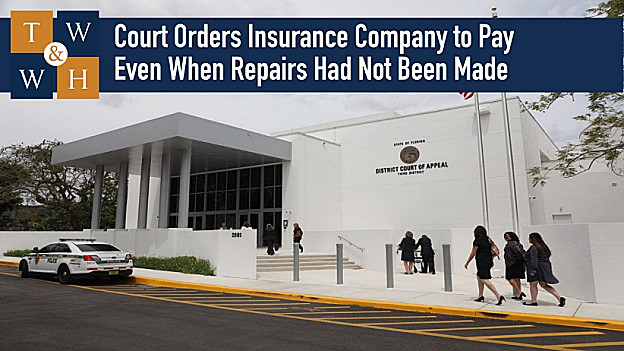 After Citizens wrongfully denied coverage saying it was excluded, the policyholder in Tio filed a lawsuit against Citizens for breach of the insurance contract.  Often this is the only way to get an insurance company to change its course and do the right thing, which is exactly what Citizens did in this case.  After the lawsuit was filed, Citizens changed its course and stipulated that the damages were covered, taking a complete 180-degree different position from its initial position.  Citizens' goal in doing this, however, was to offer to pay only actual cash value on the claim, not the full replacement cost value that was owed.  All too often we see insurance companies, at every juncture in the claim, taking a position (sometimes even a contradictory one) that will give them more advantage and allow them to pay less on the claim.  In Tio, the actual cash value—which is the value of your property in the condition it was in at the time the damage occurred considering age, wear, depreciation, etc.—was only $2,300, which was less than the deductible, meaning no payment owed on the claim according to Citizens.  The replacement cost value, however—which is the cost to repair or replace the property to its former condition—was $92,000.  You can see why Citizens took the position it did.

It is important to understand the insurance company's tactics here because your property insurance policy is very likely a replacement cost policy that operates just like the one in Tio.  Citizens was making this argument, that it was only obligated to pay the actual cash value which was zero after applying the deductible, because the policy and Florida law only obligated it to pay actual cash value, initially, then any remaining repair costs “as work is performed and expenses incurred.”  Fla. Stat. § 627.7011(3).  In this case no repairs had yet been undertaken in this matter because the policyholder, very understandably, did not have the funds to front the repair costs themselves.  The policyholder paid the premiums to Citizens to be certain they had insurance coverage if something like this happened.  However, Citizens completely denied coverage when the policyholder filed the claim.  The outright denial of coverage was a material breach of the insurance policy and Florida law.

Only after the policyholder hired an insurance attorney who filed a lawsuit against Citizens did things change.  At the outset of the lawsuit Citizens quickly changed its position admitting coverage.  Despite the prior denial of coverage, Citizens attempted to argue that it was only legally obligated to pay actual cash value because no repairs had been made.  Citizens made this argument because the actual cash value was far less than the deductible.  As such, Citizens argued that the policyholder had no damages.  Thankfully, the Court saw through Citizen's smoke screen calling its position “creative but unavailing.”  Under Florida law, once a contract is signed for repairs to begin, your insurance company is obligated to issue payment so those repairs can commence.  In addition, if your insurance company has in any way breached the policy by, as here, wrongfully denying coverage (by wrongfully claiming it is excluded), the insurance company can no longer claim any benefits of the policy, such as a limitation on your damages.  In ordering Citizens to pay the full replacement cost value rendered by the jury in Tio, the court explained an insurance company cannot breach the insurance policy then claim the advantages of the terms of the policy at its convenience.  Once an insurance company breaches, meaning it has broken one of the promises made in the policy, it becomes liable for all damages caused by its breach, regardless of policy terms and provisions.