This insured was certainly not in “good hands” when he filed a claim for coverage he was owed under his policy with Allstate.  Thankfully, Alabama Circuit Court Judge, Karen K. Hall, called Allstate out for its egregious conduct in willfully refusing to attempt to mediate and settle the case in good faith.  She ordered sanctions against Allstate in the amount of $626,141.36.  Read on to find out what costly lengths insurance companies will go to in hopes that policyholders like you will lose stamina, give up, and unfortunately accept far less than your claim is actually worth. 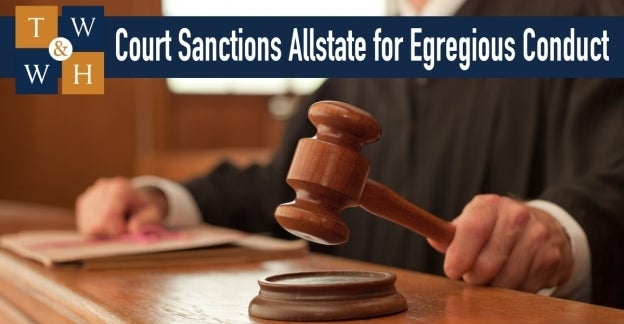 This lawsuit was filed after the plaintiff, Douglas Harbin, was injured in a car accident.  Harbin was not at-fault.  But, he suffered significant injuries and incurred medical expenses in excess of $230,000.  Because the at-fault driver did not have sufficient insurance to cover Harbin's expenses, Harbin rightfully filed a claim with his own uninsured motorist (“UM”) coverage provider, Allstate, to recover the $75,000 in UM coverage he purchased to protect him if something just like this happened.  Allstate denied, and Harbin was forced to sue in circuit court to recover on his insurance claim.

As a result of Allstate's willful conduct, the plaintiff's attorney had to spend another 157 hours and incur an additional $5,000 in costs to bring the case to trial.  Also, although Allstate initially denied liability in its Answer to Harbin's Complaint, it changed its position and admitted to liability only on the eve of trial.  This is a tactic we see often.  Harbin and his attorneys tried the case to a jury who found Harbin was due his UM coverage.  The jury entered a verdict against Allstate in the amount of $690,000.  Yet, this was a result Harbin and his attorneys could only achieve if they had the stamina, resources, and perseverance to continue fighting Allstate, in and out of court, in the pursuit of justice.

Although Allstate's willful failure to participate in the mediation in good faith was grounds enough for sanctions, Judge Hall noted multiple other orders issued by other judges in Alabama entering sanctions against Allstate for similar conduct.  The court found this to be a “troubling trend” showing Allstate's systematic use of the civil justice system merely to delay, prolong, and deny legitimate insurance claims.  As a result, Judge Hall entered sanctions in the amount of $626,141.36 against Allstate to compensate Harbin and his counsel for the time and effort they had to expend to try this case after Allstate's failure to mediate in good faith and to “impress upon Allstate” that the civil justice system is not to be used to delay and deny but to “secure the just, speedy, and inexpensive determination of every action.”  Remember, all the policyholder asked Allstate to do after being injured was pay the $75,000 coverage limit which the injured policyholder purchased from Allstate.  Instead, Allstate chose to hire lawyers and experts to attempt to avoid its obligation to pay.  Allstate willingly incurred exponentially more cost fighting the claim than simply paying it.

We are proud of Judge Hall's ruling in this opinion and the efforts she took to thoroughly outline and highlight Allstate's inexcusable conduct in mistreating its own policyholder and abusing the civil justice system.  It is cases like this that fuel our fires and keep us fighting for policyholders when insurance companies wrongfully deny their claims.  If you feel an insurance company is treating you unfairly or trying to delay or unnecessarily prolong your claim, contact us for a free no-cost, no-obligation insurance claim review.  At Taylor, Warren, Weidner & Hancock, we fight for you.