It appears Pensacola Representative, Alex Andrade, is listening more closely to the insurance company lobbyists than his own constituents in filing House Bill 751 which could take away your ability to sue your insurance company for bad faith. A recent investigative report from WFLA featured a Florida Hillsborough County resident, John Oates, whose home was damaged 18 months ago by Hurricane Irma, yet he still has not been paid in full by his insurance company.  Under current Florida law, Oates exercised his right to sue his insurance company for bad faith for failing to timely pay his claim. Under House Bill 751, however, if passed as written, Oates' case would have had to proceed through the Department of Administrative Hearings rather than the civil justice system—where everyday citizens, like you, can hold insurance companies accountable. 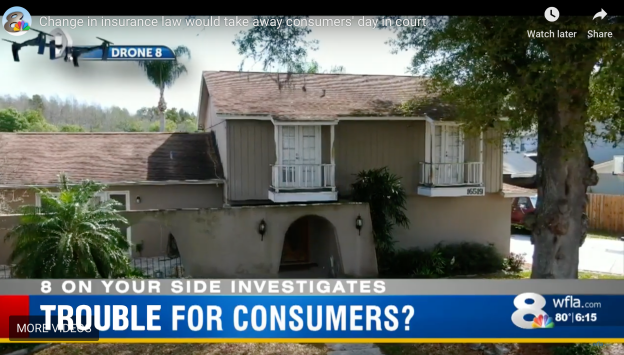 How House Bill 751 Could Change the Law

Unfortunately, after a hurricane, many storm damage victims go months, years even, without being paid in full on their claim.  Florida law currently allows victims like this to file suit and recover expenses incurred in doing so, such as attorneys' fees.  Florida Statute 627.428 allows our firm to pursue an insurance company that has wronged its policyholder by failing to timely pay a legitimate claim and recover our fees from the insurance company.  This law is what allows us to fight the insurance company on the victim's behalf, without requiring the policyholder to pay our fees upfront.  House Bill 751, however, may take away a citizen's right to sue his or her own insurance company when the company wrongfully refuses to pay the full value of the claim.

HB 751, as Written, Will Protect Insurance Companies Not Policyholders

While Andrade and the other bill's supporters claim the bill was proposed in response to increased insurance rates as a result of bad faith litigation, the Florida Justice Association and Taxpayers Against Insurance Bad Faith have opposed HB 751. Dale Swope, who represents Taxpayers Against Insurance Bad Faith, characterized the bill as a “get-out-of-jail free card that benefits no business in Florida, except for insurance companies.”

House Bill 751 is currently passing through various legislative committees on its way—in some shape or form—to the house floor.  You can learn more about House Bill 751 and/or contact Representative Alex Andrade to vocalize your opinion on this proposed bill via the links below.  If you've suffered damage to your property from a storm and do not feel the insurance company has treated you fairly or paid you the full amount owed on your claim, contact us for a no-cost, no obligation case review to learn your rights.  www.twwlawfirm.com  (850) 438-4899