Florida Supreme Court Stands Up for Juries and Justice!

In a tight, 4-3 decision, the Supreme Court of Florida recently settled the long-standing debate of whether Florida state courts would continue to apply the Frye standard Florida has been using for decades to determine the admissibility of expert witness testimony, or convert to the Daubert standard, which most other states use.  See Delisle v. Crane Co., Case No. SC16-2182 (October 15, 2018).  In a surprising and admirable opinion, written by Justice Quince, the Florida Supreme Court decided to grant juries, as opposed to judges, more authority under the Frye standard to determine the reliability of expert testimony.

As passionate advocates of our country's civil justice system, we, at Taylor, Warren & Weidner, applaud this decision.  Jury trials are one of the only avenues for justice that give everyday citizens a voice against big corporations and enable us to hold them accountable.  We are proud and excited to share the court's decision to put more faith in juries and allow more access to justice. 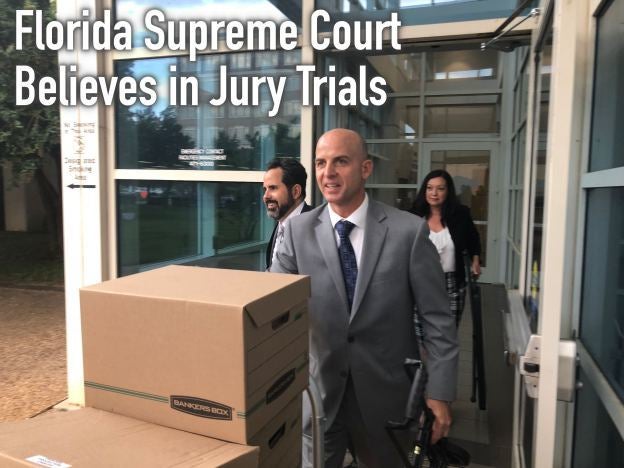 The decision by the Florida Supreme Court came out of an appeal from the 4th DCA that overturned a verdict in favor of the plaintiff, an asbestos victim.  On appeal, the 4th DCA found the expert testimony used to support the jury's verdict was not sufficient under the Daubert standard.  According to the Florida Supreme Court on further appeal, Daubert—even though it was signed into law in Section 90.702 Florida Statutes in 2013—was the wrong standard to apply.

Why?  Because the Florida Supreme Court determined Section 90.702 is unconstitutional.

The basis of the Supreme Court's decision was two-fold.  First, the court determined Section 90.702 enacted by the legislature was one of procedure, not substance.  The courts have long held that while they are required to apply the substantive laws enacted by the legislature, courts have the exclusive authority to enact procedural law.  That is the law that governs the “form, manner, and means” by which courts apply substantive law.  The Florida Supreme Court concluded the legislature's attempt to enact a procedural law (the Daubert standard) governing the court was unconstitutional.  This, in turn, meant the 4th DCA's application of Daubert was unconstitutional and merited an overturn.

Second, the Florida Supreme Court also determined Section 90.702 conflicted with a procedural law that was already enacted by the courts: that being the Frye standard for determining the admissibility of expert testimony.  The court, in its majority opinion, overwhelmingly reaffirmed Frye as the appropriate standard, not Daubert.

Why?  Because Daubert limits the jury's right to determine the reliability of scientific evidence.

Florida Supreme Court Stands Up for Justice by Juries

The court readily conceded that both methods, Frye and Daubert, are “tools necessary to ensure only reliable evidence is presented to the jury.”  Delisle, Case No. SC16-2182, at 19.  However, where Frye “relies on the scientific community to determine reliability,”Daubert “relies on the scientific savvy of trial judges to determine the significance of the methodology used.”  Id.  Granting such authority to judges, in the opinion of the Florida Supreme Court, “usurps the jury's role in evaluating the credibility of experts and choosing between legitimate but conflicting scientific views.”  Id. at 20.

While the court conceded Frye will not apply to the vast majority of cases because it only applies when experts render an opinion based on new or novel scientific techniques, Justice Pariente, in his concurring opinion, explained why this does not justify a need for judges to play a Daubert-esque gatekeeping function. For any expert evidence that is not based on novel or new techniques the only determination that the judge needs to make is whether it “will assist the trier of fact and is not unduly prejudicial.” Id.at 23.  That is all. Daubert, Justice Pariente explains, “reflects a mistrust of the jury system and the ability of the jury to weigh the evidence.”  Id.

Many Defendants Use Daubert As a Sword Against Plaintiffs' Attorneys

Adhering to Frye makes the expert admissibility process quite simple.  This is likely the reason many defendants—most often big corporations represented by big national defense firms—do not like it.  As Justice Pariente explained, it has long been a belief in Florida that Daubert unconstitutionally limits access to courts because it applies in more cases.  Id. at 25.  In addition, it allows defendants to use it “as a sword against plaintiffs' attorneys” to clog the courts with time-consuming and expensive motions.  Id.at 25.

Justice Canady who filed a dissenting opinion, in which Justices Polston and Lawston concurred, based their dissent on a finding the Florida Supreme Court did not have jurisdiction to review this matter under the “express and direct conflict” provision because the decisions below were not the “same questions of law.”  Id.at 36.  They did not address the merits of the Frye versus Daubert debate.

We are very proud of the Florida Supreme Court's thorough and thoughtful review of this matter and the Justices' passionate adherence to jury trials as a fundamental and necessary right in our democracy.  It is opinions like this that enable us, and attorneys like us all over the State of Florida, to continue to stand up for everyday citizens and have their stories heard and decided by people just like you.  To those insurance companies who lobbied hard for Section 90.702 in hopes of limiting our ability to expose you to judgment by juries, you lost today. We consider this opinion a huge win for all citizens in Florida.