Under the guise of an effort to reduce insurance premiums and save on insurance costs, insurance companies have unfortunately successfully lobbied for, and recently obtained, passage of a bill, SB 76, that offers them more protection and limits your ability to pursue your insurance company when they fail to pay your claim in full.  On its last day of legislative session, April 30, 2021, the Florida Legislature passed SB 76 which will enact sweeping changes to policyholder rights that will take effect July 1, 2021.  While the bill purports to be a response to what insurance companies are calling an explosion of roofing claims and litigation that they claim have raised the cost of insurance, the actual effect of the bill reduces the amount of time policyholders have to report claims and severely limits their ability to sue their insurance company when they do not pay the claim in full. 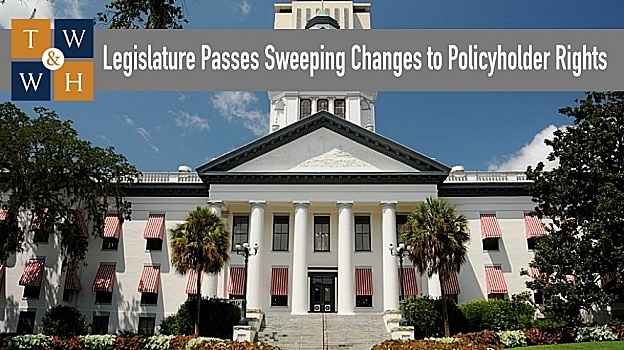 Virtually every homeowner's policy contains a “Your Duties” section that requires you to give prompt notice of a loss to your insurance company.  However, as many hurricane and storm victims have discovered, trying to figure out how much damage your home truly sustained during a storm is a difficult process.  It can be hard to determine, from the naked eye, whether your property sustained enough damage to exceed your hurricane deductible in order to decide whether you should file a claim at all or whether it sustained damage deeper and more hidden than the initial things you see, i.e., a downed fence, tree limbs in the yard, a ripped screen, etc.  Many damages are unseen to the untrained eye and do not manifest themselves until months later when an experienced contractor or adjuster has been brought in to inspect your property, a process that takes time and money.  This is why it is not uncommon for policyholders to not discover the full severity of the damage their home sustained during a storm, and then realize the need to report the loss, until months, sometimes years, later.

Previously, a claim or re-opened claim that was reported within at least three years from the date of loss could not be barred as a pure matter of law.  Rather, the insurance company would have to argue, as a defense to coverage, that the policyholder's failure to provide timely notice violated the policy of insurance.  A fact issue would then have to be determined as to whether the failure to provide prompt notice prejudiced the insurance company's investigation.  Allowing policyholders three years to report a claim before having it deemed legally barred was a benefit to policyholders.  However, SB 76 has reduced this timeframe from three years down to two years.  Meaning, if you do not discover the full severity of your damage and, therefore, do not report your claim within two years of the date of loss, i.e., the date of the hurricane, your insurance company can assert your claim is barred as a matter of law, as a matter of SB 76 to be exact.  There will be no factual determination to be made where you can try to argue your case or that your failure to report timely did not prejudice the insurance company.  The court will dismiss your claim outright pursuant to SB 76.  This change in policyholder rights is a sad loss to policyholders and an unfortunate win for insurance companies.

SB 76 Limits a Policyholder's Ability to Sue Their Insurance Company

Previously, once a policyholder fulfilled his or her duties under the policy (discussed further here) and gave the insurance company a reasonable amount of time to adjust the claim, but the insurance company, as they often do, continued to delay full payment on the claim, the policyholder could then sue immediately for full payment on the claim.  It is often the case that it takes a lawsuit to finally force an insurance company to do the right thing and pay in full.  This is because once a claim converts to a lawsuit, it is often transferred to a different department in the company, assigned different, higher-level employees to look into it, and, often, a more detailed review of the insurance company's adjustment of the claim is conducted.  Think of it as a sales employee refusing to accept your return and issue a refund so you ask to speak to the manager.  Things usually get escalated then and, often, you reach an amicable resolution much sooner.  This is a lot like what happens when we file suit against an insurance company.  Essentially, by filing suit, we take your case to the manager for resolution.  The new provisions in SB 76, however, severely impact your right to sue.  Think of it as taking away your right to speak to the manager and replacing it with a requirement that you have to submit a specific form to the manager to which the manager will respond in 10 days.

Under SB 76 policyholders who feel the only way to recover in full on their claim will be to sue their insurance company will be required to first file a pre-suit demand at least 10 days before filing a lawsuit.  The demand must be filed on a specific form provided by the Department of Financial Services and must include, among other mandatory items, an estimate of the damages—a number that is often hard, and costly, for a policyholder to calculate.  SB 76 also prohibits policyholders from filing this pre-suit demand “before the insurer has made a determination as to coverage.” In broad strokes, such a determination speaks to whether the insurance company has decided to deny coverage for the claim or find the loss is covered and begin its evaluation and adjustment of the claim.  However, this is a very loose phrase as throughout adjustment of a covered claim, the insurance company will often find certain, specific damages it will deny as not covered or it will argue the policyholder's failure to fulfill its duties under the policy has now forfeited coverage.  We suspect insurance companies will use this vague prohibition on pre-suit demands before “a determination as to coverage” has been made to seek dismissal of many pre-suit demands, further delaying payment on your claim and severely limiting your avenues for redress.  Think of it as the sales employee telling you, “We haven't decided whether we're going to accept your return or not.  Once we make that decision, you can then submit our form to the manager and he will respond in 10 days.”  This new pre-suit process will likely put vast amounts of control in the insurance company's hands and hinder your ability to fight back.

If You Have Questions About Your Insurance Claim, Contact an Attorney Before this Law Takes Effect on July 1, 2021

Although the passage of this bill is disheartening for attorneys like those at our firm, who fight for policyholders and work to hold insurance companies accountable when they wrongfully delay or deny claims, we will not let this “win” for the insurance companies deter us.  We will adapt and evolve and continue to fight for your rights.  This law, which offers insurance companies more protection from lawsuits, will likely cause further delays in claims.  Meaning, if you have questions about your insurance claim or feel your insurance company has wrongfully denied or delayed your claim, you should contact us NOW for a free no-cost, no-obligation insurance claim review before this law takes effect on July 1, 2021.  Don't worry.  We'll get your case to the manager, one way or another.