We have reported before on the sweeping changes the Florida legislature enacted under Senate Bill (SB) 76.  The law went into effect on July 1, 2021 and changed the time policyholders are allowed to file property damage claims as well as limited their ability to sue their insurance company and recover their attorney's fees.  It is not entirely clear, yet, whether Florida state courts will apply these law changes to losses, claims, or lawsuits that are filed after the July 1, 2021 date or only to policies that were issued after July 1, 2021.

Courts addressing recent lawsuits filed by mitigation service providers (water remediation, tarping, removing/cleaning contents, mold assessors, etc.) that operate under an Assignment of Benefits (AOB) have been applying changes to the AOB laws retroactively to AOBs executed after the effective date of the law change, even though the policy under which the assignment occurred was issued before the law change.  If courts ruling on cases involving the SB 76 changes decide to apply those changes retroactively, this could have a significant impact on your ability to file a claim for property damage and recover from your insurance company if they do not pay timely or in full. 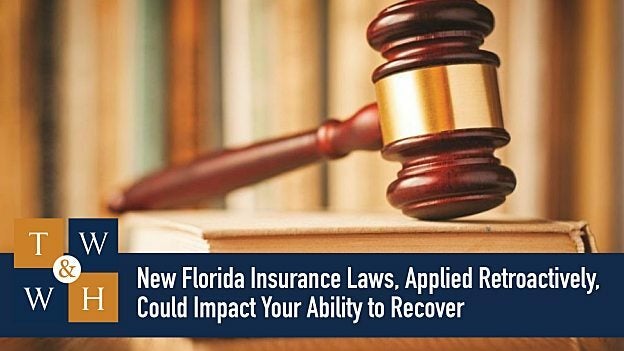 In most of the AOB cases that are being filed, Florida District Courts of Appeal (DCAs) are finding the new AOB laws apply retroactively to claims filed on a policy of insurance that was issued before the new AOB laws went into effect, July 1, 2019, if the AOB was executed after July 1, 2019.  Although this position contradicts federal opinions which find the policy inception date dictates whether law changes enacted after the policy was issued can retroactively apply, it is supported by the text of the AOB statute itself which states it applies to AOBs executed after July 1, 2019.  You can read Kidwell Group, LLC v. Olympus Insurance Company, 2022 WL 2897749 (Fla. 5th DCA 2022) as an example.

Florida Federal Courts Have Found SB 76 Cannot Be Applied Retroactively to Policies Issued After It Went Into Effect on July 1, 2021

SB 76, itself, does not contain such a clear mandate as to whether it will apply to losses, claims, or lawsuits filed after the date it went into effect, July 1, 2021.  This will be left to the courts to decide.  Thankfully, there is a long line of Florida cases finding laws that affect substantive rights arising out of a policy of insurance cannot be applied to policies that were issued before the law change came into effect.  A law effects substantive rights if it impairs a vested right, creates a new obligation, or imposes a new penalty.  Courts have found SB 76 does all three of these because it adds a new penalty by shortening the time a policyholder is permitted to file a claim.  It creates a new obligation by requiring the policyholder give its insurance company specific written notice of its intent to file suit and allowing the insurer an additional ten (10) days to accept coverage.  It also invokes a new penalty by limiting the amount of attorney's fees the policyholder can recover if he/she has to file suit to get paid in full on the claim.  Because SB 76 impacts these substantive rights which arise out of the policy of insurance, Florida federal courts, relying on a Florida Supreme Court opinion from 2010, have found the SB 76 changes cannot be applied retroactively to policies that were issued prior to July 1, 2021.  See Menendez v. Progressive Exp. Ins. Co., Inc., 35 So. 3d 873, 877 (Fla. 2010) and Bharratsingh v. Lexington Ins. Co., 2022 WL 3279537 (S.D. Fla. Aug. 10, 2022) as examples.

However, the Florida Supreme Court Menendez decision was decided long before SB 76 was ever enacted, and Florida federal courts interpreting Florida state laws are not controlling over Florida state courts.  The Florida DCAs have not yet taken up the issue of whether SB 76 can be applied retroactively to losses, claims, or lawsuits filed after the date the law went into effect on July 1, 2021.  Only time will tell whether the Florida state courts will follow the reasoning in Menendez and the federal courts citing it in finding SB 76 cannot be applied retroactively to policies of insurance that were issued before July 1, 2021.  If courts find SB 76 can be applied retroactively this could impact the timeframe in which you have to file an initial or reopened claim—now only two years as opposed to the previous timeframe of three years—as well as your ability to file suit against your insurance company and recover your attorney's fees if legal action is required to force your insurer to pay your claim in full.

We will continue to monitor opinions coming out of the Florida DCAs for rulings interpreting and applying the changes enacted in SB 76 and keep you and our clients advised.  If you have questions about the new changes SB 76 enacted or about your own policy of insurance or insurance claim, never hesitate to contact us for a free, no-cost, no-obligation consultation.  We are always here to help and answer your questions to ensure you understand your rights and your insurance company's obligations to you.