This is the new game we've seen insurance companies playing recently: the insurance company issues a demanding request for a long list of documents then claims your failure, as the policyholder, to produce the documents they requested has hindered their investigation allowing them to delay or deny your claim.  Often these document requests are lengthy and seek records that extend years back and do not seem to have anything to do with your insurance claim.  Often because they do not.  But, your duty to produce them in response to the insurance company's request is called a “post-loss obligation”—it is a requirement you must fulfill under the policy—and it is a tactical tool insurance companies are using more frequently to delay payment or deny the claim entirely, which is what happened in this case.

Insurance Company's Attempt to Use Post-Loss Obligations as a Tactic

In Shinui Builders, LLC v. Zurich American Insurance Company, Case No. 5:20-CV-278 before the U.S. District Court for the Northern District of Florida, we represent the policyholder, Shinui, a local business that builds custom homes.  When Hurricane Michael caused significant damage to numerous high-end homes in Panama City Shinui was in the process of building and Shinui filed a claim for the repairs, rather than pay the claim timely and in full, Shinui's insurance company, Zurich, went on the attack.  Within months of reporting the loss, Zurich requested Shinui produce sworn proofs of loss, a requirement we have discussed here often, that places an enormous burden on policyholders to precisely estimate their own damages and comes with dire consequences, i.e., forfeiture of coverage, if the proof of loss is not submitted on time, generally within 60 days.  A request for a sworn proof of loss is often a bully tactic insurance companies use to harass and intimidate their policyholders. 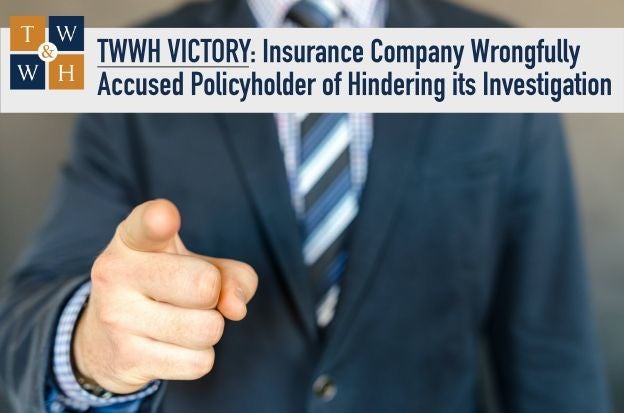 Although Shinui provided detailed sworn proofs of loss, as well updated proofs of loss, Zurich persisted in its demand that Shinui produce more, thousands of pages total, of construction records claiming it could not determine the cost to repair without them.  Shinui spent months and incurred great costs to fulfill Zurich's demanding requests.  Shinui even sat for a lengthy Examination Under Oath and produced more records, which still did not satisfy Zurich.  It was clear Zurich was trying to use Shinui's post-loss obligations to harass Shinui and avoid its obligation to pay this claim.

The Court Found Shinui Had Fulfilled Its Obligations

As a result, we filed a motion for partial summary judgment on Shinui's behalf, asking the Northern District of Florida to look at everything Shinui had provided and the enormity of Zurich's requests that it had fulfilled and determine, as a matter of law, Shinui has done enough.  After reviewing Shinui's extensive document production, the court agreed: Shinui did enough.  The court noted that Zurich, while it had argued Shinui's failure to produce certain documents had prejudiced its investigation, it produced no evidence to support this claim and the facts suggested Zurich was not prejudiced at all in its investigation by an alleged failure on Shinui's part to produce documents.  After reviewing all the evidence, the court found no reasonable juror could find Shinui's immense efforts to comply with Zurich's imposing demands amounted to a prejudicial failure to comply with post-loss obligations.

Use of Post-Loss Obligations as a Weapon Is Not Uncommon

What Zurich did in this case is in no way uncommon.  In the many Hurricane Michael and Sally cases were are currently handling we have seen insurance companies often try to use the policy's post-loss obligations against the policyholder.  In a hurricane case, the insurance company will often issue a request for documents, usually photos of the damage, any estimates of the cost to repair, and receipts or invoices for repairs, as well as a sworn proof of loss very early in the claims handling process.  They do this to intentionally place an enormous, dangerous burden on the insured in hopes that they will make a misstep and give the insurance company a reason to delay or deny the claim.  The insurance company will often also claim—no matter how much documentation you provide, much like Zurich did in the Shinui case—that whatever you provide still is not enough and your failure to produce more documents has prejudiced their investigation.  This is all just a tactic, an attempt to try to use provisions of the policy against you to intimidate you out of fighting for every dollar to which you are entitled.

Do Not Let an Insurance Company Bully You