Should You Record an Insurance Adjuster’s Inspection of Your Home? YES.

You may be wondering: Why?  Won't my insurance company send an adjuster out to fairly and accurately inspect my property and document the damage?  Not always.  You have to remember who the adjuster works for.  As insurance attorneys who have helped hundreds of policyholders with their insurance claims, it is not surprising when a new client tells us the adjuster only spent an hour at their property, or didn't even go on the roof, or refused to photograph damage that was pointed out to them.  We have even seen adjusters, who were instructed to go out and “identify all damage,” document significant damage to the roof caused by a major storm event but then refuse to step foot inside to look for any possible interior damage.  Actions (or inactions) like these by the adjuster during the initial inspection can later become an issue of great dispute in your claim. 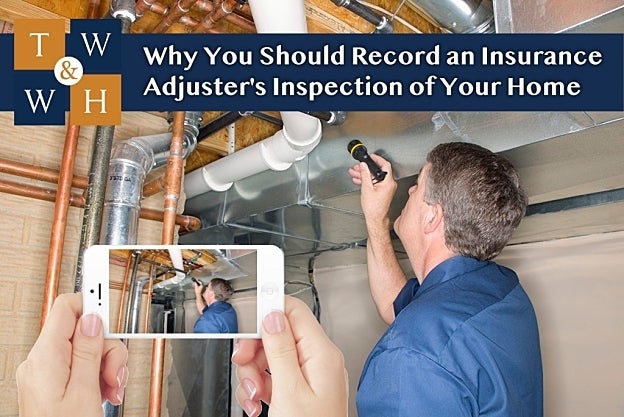 Why Is the Initial Inspection So Important?

Refusal to Inspect While Being Recorded Declared Improper in Gesten v. American Strategic

Although American Strategic claimed the insurance policy supported its ability to refuse the recording, the Fourth DCA disagreed quoting the plain language of the policy which merely required the homeowners to “show the damaged property” when requested by American Strategic.  The policy said nothing about whether the inspection could or could not be recorded.  Despite this, American Strategic continued in its refusal to simply inspect the property while being recorded, claiming the recording would impair it's adjuster's ability to freely discuss and evaluate the damage.   We find it hard (or more likely impossible) to understand how a recording could impair free discussion and evaluation.  Thankfully the Fourth DCA agreed, finding the insurance company adjuster had no expectation of privacy when entering the Gestens' home to conduct the inspection and that nothing in the Gestens' policy language—which is similar to most homeowners' policies—prevented their right to be present during the inspection and openly record it.

Why You Must Be Proactive in Protecting Your Claim, Your Evidence, and Your Rights

Although most homeowners who have to go through the frustrating process of filing an insurance claim because their home was damaged by a storm or fire only want what is fair, they are often not paid what is fair because their insurance company does not play by the rules.  Unfortunately, at Taylor, Warren, Weidner & Hancock, we are very familiar with the games your insurance companies may try to play to avoid paying your claim in full.  This might include a refusal to inspect your property while being recorded because they do not want evidence created that would undermine their ability to subsequently dispute damage that was present and identifiable during the initial inspection.  The good news is, we know how to play their games and beat them at it.  Last year, we were the first law firm to take an insurance company to the mat and get the first jury verdict in Bay County on a Hurricane Michael claim that had been woefully underpaid before it was wrongfully denied altogether.  Don't let your insurance company play games you.  We are prepared to fight for your rights and we never charge any fee, cost, or obligation to simply answer your questions and evaluate your claim. Contact us.