Beginning on May 4, 2020, a dangerous fire, now widely known as the Five Mile Swamp Fire, burned out of control near Milton, Florida for over a month consuming nearly 2,300 acres and destroying the homes and property of numerous Santa Rosa County residents.  Westervelt Ecological Services, LLC (“Westervelt”) owns the property where the burn, intended to remove brush and undergrowth, was supposed to take place.  Westervelt hired Munroe Forest & Wildlife Management, Inc. (“Munroe”) to conduct the burn.  It was supposed to be a planned burn conducted in accordance with certain statutory safety requirements.  When evidence of negligence emerged, however, Taylor, Warren, Weidner & Hancock partners, Phillip Warren and Keith Weidner, filed a class action lawsuit against Westervelt and Munroe on behalf of Santa Rosa County residents whose properties and homes were lost to, or damaged by, the Five Mile Swamp Fire. 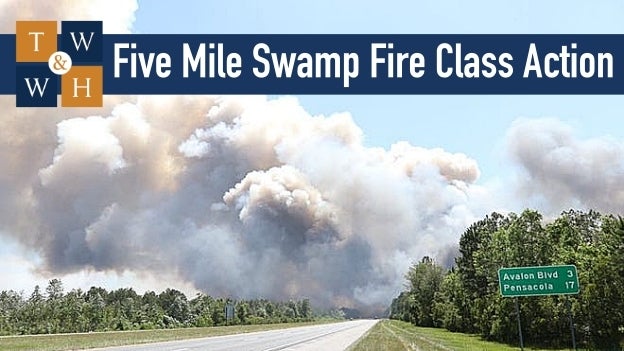 Residents Allege the Defendants Were Negligent in Conducting the Burn

In the class action complaint, the Santa Rosa County residents allege Westervelt and Munroe were negligent in conducting the planned burn by starting the fire in unsafe conditions and without the necessary and adequate fire control precautions in place.  In support of their claims, the residents allege that at the time the fire was set, the burn zone and surrounding area had received very little rainfall making it dry and more susceptible to uncontrolled ignition.  In addition, the weather forecast called for high winds and low humidity, and the area was experiencing abnormally dry to moderate conditions at the time Defendants Westervelt and Munroe decided to ignite the fire, according to the complaint.

The residents also allege the controlled burn was executed using insufficient firefighting equipment that broke down and became inoperable.  They contend Westervelt and Munroe did not select the right type or quality of equipment to use during the controlled burn to ensure they could control the fire.  The complaint also alleges that fire breaks meant to contain the fire were inadequate.  The fire allegedly had escaped for nearly one hour before the Florida Forest Service or other firefighting units were alerted allowing the fire to grow nearly ten times its intended size.  The residents claim these allegations show the escape and uncontrolled burning of the fire was the result of Defendants Westervelt and Munroe's negligence.

Defendants Responded by Arguing They Are Immune Under the Law

To avoid liability based on these allegations, Defendants Westervelt and Munroe filed motions to dismiss the class action complaint.  In their motions, the Defendants argued the Santa Rosa County residents could pursue a claim for reckless negligence only, and that Florida law insulated the Defendants, i.e. made them immune to, claims of ordinary negligence.  Essentially, the Defendants claimed Florida law protected them so that they could only be responsible if the residents met a much higher burden of proof making it more difficult to hold them accountable for damage caused by the fire.

Circuit Court Judge J. Scott Duncan disagreed.  He recently entered an Order denying the Defendants' Motion to Dismiss, finding Florida law did not provide the immunity the Defendants were claiming.  Instead, the residents are now permitted to pursue the Defendants on claims of both ordinary negligence and gross negligence for the allegedly unsafe and improper burn they allowed to escape and cause so much damage in Santa Rosa County.

Many homeowners living near Westervelt's property where Munroe ignited the fire have lost their homes entirely, through no fault of their own.  While prescribed burns conducted in accordance with the legal safety requirements are necessary and beneficial for the land, when companies ignite fires under circumstances that would suggest the burn was negligent, they should be held accountable for the full extent of the damage caused.  With the court's ruling, our Five Mile Swamp Fire class action can now continue to proceed toward trial.  The entire team at Taylor, Warren, Weidner & Hancock is looking forward to presenting our evidence to a jury and giving them the opportunity to render justice.