Another Reason to Avoid Force-Placed Insurance from Your Mortgage Company

While there are many pitfalls to force-placed insurance, a recent opinion from the Florida Fourth District Court of Appeals, which found the policyholder did not have the right to sue her force-placed insurance company to recover the full amount owed on the claim, felt like a good opportunity to point out problems you can face if your mortgage company places forced insurance on your property. 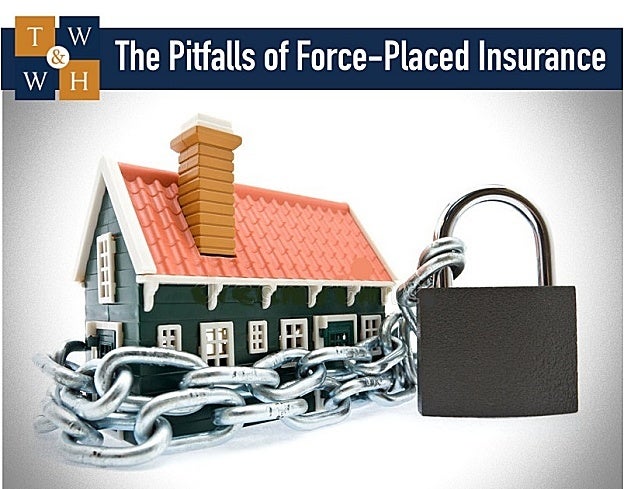 What Is Force-Placed Insurance?

What Are the Pitfalls of Force-Placed Insurance?

Unfortunately, force-placed insurance is usually a lot more expensive than typical homeowner's insurance. And, because the bank has the right in the mortgage to force insurance if it deems your insurance is compromised, cancelled, or insufficient, the bank has the right to force you to pay the higher premium.  What's worse is, for a higher premium, you will often be getting far less coverage as force-placed policies often do not provide as much coverage as a typical homeowner's policy.  For example, force-placed policies sometimes only provide coverage on your dwelling up to the amount owed to the bank, not the full value of your property.

Also, force-placed policies often do not cover personal property items or additional living expenses.  Meaning, if your force-placed insurance coverage is limited in this manner and a hurricane strikes, displacing you from your home and causing thousands of dollars' worth of damage to the contents of your home, you would not be able to recover the cost of those items or the additional costs you incur while living somewhere else (rent, hotel, gas, etc.).  Another pitfall of force-placed insurance?  If you disagree with this coverage decision, i.e., a denial of payment for your damaged personal property or additional living expenses for example, you may not be able to sue the insurance company to fight this decision.

In Reconco v. Integon National Insurance Company, the property at issue was insured by a force-placed insurance policy when Hurricane Irma struck and damaged the property.  2021 WL 264186 (Fla. 4th DCA 2021).  Because the force-placed insurance policy defined the “insured” as the bank, not the homeowner, with language specifically stating it was not the intent of the policy to benefit the homeowner, the Florida Fourth District Court of Appeals determined it was the bank, not the homeowner, who had the right to sue the insurance company if there was a dispute over the amount the insurance company paid to the bank on the claim.  Reconco, 2021 WL 264186.  As many of you are unfortunately well aware, there is often a dispute as to how much the insurance company is obligated to pay on the claim.  This is a dispute we handle, litigate, and argue over every day at Taylor, Warren, Weidner & Hancock, always on the policyholder's behalf.

Unfortunately, however, when the homeowner in Reconco tried to fight the decision of the insurance company to pay a lesser amount on the claim, and pay it all to the bank, nothing to the homeowner, there was nothing the homeowner could do.  Id.  The court found the language of her force-placed insurance policy granted the right to sue over a dispute solely to the bank.  Id.  Because the language of the policy prevented the homeowner from bringing suit the court dismissed her complaint, leaving her no other recourse.  Id.  This is a significant downside to allowing your property to be covered by a force-placed insurance policy.

As soon as possible, contact an insurance carrier and get a new policy or seek to have your old policy reinstated.  In the interim, even if you disagree with the bank's decision to force-place insurance or you think the premium is too high, you should continue to make payments for the force-placed insurance until you can get new insurance in place.  Once you have obtained a new policy, gather detailed proof of the new insurance and send a copy of the relevant documents to your bank or mortgage servicer and request that they cancel the force-placed insurance policy they obtained for you as soon as possible.  If you are unsure whether your property is covered by a force-placed insurance policy or a typical homeowner's policy, feel free to contact us for a free no-cost, no-obligation insurance review.  We are always here to help and happy to answer your questions to ensure you understand your coverage and your rights.