They wrote it, so they know how to use it against you.  Insurance companies will often point to any fine print they can find in the policy that arguably lets them deny coverage. Thankfully, the Florida Fifth Circuit Court of Appeals would not let this insurance company get away with it. See Eckols v. 21st Century Centennial Insurance Company, 2018 WL 6422088 (Fla. 5th DCA, 2018). 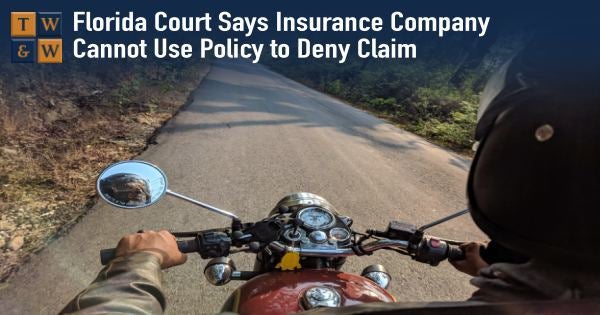 Here's what happened in this coverage dispute:

The policy at issue in Eckols was a policy that provided uninsured or underinsured coverage, frequently referred to as “UM” coverage.  This is insurance we always recommend Florida drivers obtain to ensure the most protection possible.  If you are struck by someone who is driving without enough insurance to pay for your damages, or not any insurance at all, your own UM coverage will then kick in to help cover your medical bills, lost wages, and more while you recover.

As with almost all coverage available, however, most insurance companies build in a set of exclusions in the policy that will apply to exclude UM coverage in certain circumstances identified in the policy.  This was the UM coverage exclusion at issue in the case; the policy stated:

We do not provide Uninsured Motorist Coverage for bodily injury sustained:

At first glance, it would appear the son's insurance claim in this case could be denied because he was driving a vehicle he owned—his motorcycle—when he was injured. Sadly, that argument won the day at the trial court level, where the court upheld the insurance company's denial of the claim.  Fortunately, the Florida Fifth Circuit District Court of Appeals reversed and found the claim was covered.  This was their ruling:

While the policy—which the insurance company wrote—defined “owned,” it did not define “motor vehicle” as stated in the exclusion.  The definition of “owned” covered ownership of an “auto” or “trailer.” Deeper in the policy, “auto” was defined as a “four-wheeled vehicle.”  Meaning, as the motorcyclist's attorney wisely argued here, because a motorcycle is not a four-wheeled vehicle, it could not be used to exclude UM coverage under this provision.

While the insurance company tried to argue the provision was clear on its face and clearly included an injury while driving an owned motorcycle, the court disagreed and found the provision was ambiguous as to whether a “motor vehicle” included a two-wheeled motorcycle.  Thankfully, under the law in many states, including Florida, when a policy provision is found to be ambiguous, the courts are instructed to interpret the policy in favor of finding coverage.

That is precisely what the court did in this opinion, reversing the trial court's ruling denying coverage, and ordering the insurance company to pay this injured motorcyclist's claim.  We report on decisions like these as they are encouraging in our fight against insurance companies that constantly try to write provisions they can twist and manipulate to avoid paying legitimate claims.  Don't let them.  We never charge for an initial consultation to review your claim and tell you what the insurance company is obligated to pay you.  If you've been injured in a car accident or have suffered damage to your home, contact us for a free, no-obligation case review.